We’ve been praying for rain and on Tuesday, we got it. It rained most of the afternoon.
There were also

some rumbling storms that came through, with those beautiful, yet terrifying lightning strikes (see the bottom of this story for some pictures of lightning’s calling card). At one point, a thunderstorm came through, and the thunder and lightning seemed to be getting closer and closer. Then there was a bright flash and an immediate boom that made everyone in the house jump. We looked out the window, expecting to see a tree down in our yard, but we didn’t see anything. A few minutes later, our security company called me to let me know that the fire department was at the church and wanted me to come let them in. The church took some electrical damage, but it could have been much worse. I am thankful that we had proper electrical wiring. Let this be a lesson to Trustees everywhere: Ground wires, GFCI outlets, circuit breakers, and power supplies are all good things. I never thought of it before Tuesday. I’m glad somebody did!

Even with all those precautions however, we took some damage. We have had to replace our phone, sound system (even though it was unplugged;apparently choir condenser microphones attract electricity), and security system. But it was the tree in front of the church took the bolt directly. The lightning wrapped around the tree in a perfect spiral, then went out the base of the tree to go under the concrete slab of our church. From there, it followed the underground wire to an electrical outlet by our sign, blowing the outlet and sending its cover flying. It also traveled the other direction to come out from under the slab near the parking lot. I have seen plenty of storm damage in my time, but this is the most perfect lightning strike I have ever seen. The spiral around the tree is amazing, and there is some form of beauty and awe within it. I’m afraid that we will have to remove the oak tree. I am sad to lose it. It really was a beautiful, and terrible lightning strike. It is also a reminder that there are other churches that have recently suffered much more severe storm damage than this. Recently, tornadoes damaged several churches in Alabama and Georgia, and of course, churches in Florida, Alabama, Mississippi, and Louisiana suffered greatly from hurricanes Ivan and Katrina. This in no way compares to what those churches have gone through. 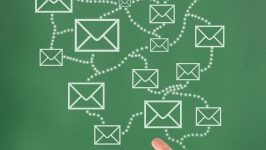