Good old Matthew Henry provided me with a good, spiritual thought for today. Thinking of Matthew 4:18-22:

Matthew 4:18-22  18 As he walked by the Sea of Galilee, he saw two brothers, Simon, who is called Peter, and Andrew his brother, casting a net into the sea — for they were fishermen.  19 And he said to them, “Follow me, and I will make you fish for people.”  20 Immediately they left their nets and followed him.  21 As he went from there, he saw two other brothers, James son of Zebedee and his brother John, in the boat with their father Zebedee, mending their nets, and he called them.  22 Immediately they left the boat and their father, and followed him. 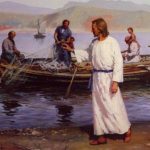 These two pair of brothers were both at work, doing what fishermen do, but they were doing different things. Peter and Andrew were fishing. They were actually out casting their nets in an attempt to catch fish. James and John, however, were not fishing. They were mending nets so that they would be prepared to catch fish the next time they went out.

So it is with Christians. We must also be of the work of casting and mending our nets as we fish for people. We must go out into the world and cast our nets for Jesus, but we must also take the time to mend our spiritual nets if we want to be an effective witness to others. If our spiritual nets are not mended, we will not be able to be fishers of people!

Now is as good a time as ever to recommit to prayer, worship, study, giving (taking time to refresh and allow God to mend our spiritual nets). Now is also a good time to recommit to casting our nets in service and witness. We must strike a balance in order to be effective.