It’s spring… I think. I almost thought that it was spring last week. I mean, after all, the kids were out for spring break. I wore a short sleeved shirt at one point last weekend, and I even went fishing with Cindy’s grandfather, as you can see below (I did not catch anything, but it was fun anyway).

Even though this picture looks like spring, I wasn’t convinced that spring was here. And I was right… the weekend came, and it got cold again. So, it must be that time between winter and spring, when the two play tug of war. But I have seen other evidences that seem to show that spring is winning the tug of war.

First, there is my lawn. I admit that I have not cut the grass since November. We have had such a cold winter, that my grass has been completely dormant. That part of winter has been nice. But now that spring is beginning to take hold, stuff is growing. That stuff should be grass, but so far it’s only weeds. Yes, spring is coming, and I am going to have to start doing yard work again. I sure hope that lawnmower will start.

Second, We have a new pet. This mother white-winged dove has built a nest on the top of our

carport cabinet. We noticed her and her love-dove hanging around in the mornings, and then I noticed that they were building a nest. She has been diligently sitting on her nest now for several days. I imagine that we will have baby doves before long. She is in a high traffic area, though. I have to walk real close to her when I go in and out of our shed. She doesn’t seem to mind too much, even when I am close up. It’s pretty cool, really. It’s a neat way to participate in spring. 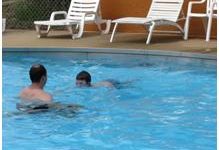