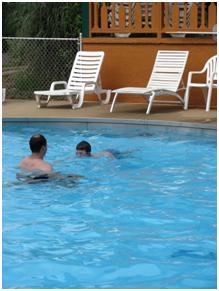 FacebookTwitterRedditPinterestEmail
My JournalJust for Fun

My son, Daniel can swim! He spent the weekend making his way around and through the deep end. He would jump off in the deep end and swim to the ladder. He would do it with his head down, swimming under water as he went. I swam right by his side the whole way, not believing my eyes. I am very proud of Daniel for his accomplishment. He’s on his way to becoming a fine swimmer.

It was very different last year. At swim lessons last year, Daniel made a big fuss about jumping off the diving board to his instructor. They ended up just lowering him down into her arms. He refused to let his head go under water. But this weekend, something clicked. That is the way Daniel is. You can try to get him to do something, but he won’t do it until he is ready. We have to wait for it to click.

I am like that, too. I either do things really well, or not well at all. Often, things either click or they don’t. There are lots of things that have clicked for me. Computers and anything technological would be good examples. There are also lots of things in my life that have not clicked yet. I got to thinking about the things that haven’t clicked, and it’s kind of a funny list:

10. Calculus. I’ve pretty much given up on that one. Don’t really need it in my profession, anyway. Well, I guess pastors are always trying to approach infinity, but that’s a stretch.

9. Drawing. I can’t draw. My stick figures are pathetic. Don’t pick me for pictionary (unless it’s for the comedy of it)!

8. Cars. I can change the oil. That’s about it. Just because I can change it doesn’t mean I do it, though. In my opinion, paying for an oil change is well worth the $.

7. Flip Flops. Cindy assures me that I am supposed to wear flip flops. I like putting on socks and shoes. I just don’t get flip flops, although I have been wearing them more lately, because I realized that I have a sock tan… my feet are so white that they look like I am wearing socks when I am not!

6. Color coordination. Cindy is often flabbergasted by my choice of clothing colors. Apparently different shades of the same color do not make a match.

4. Hats. I have come to the point in my life when I must wear a hat in the sun. This did not click before the 4th of July weekend, but I think it has sufficiently clicked now.

3. Ordering fast food. I can’t do it right. No matter how I do it, or how many times I repeat myself, I never get what I thought I ordered. Now that I think of it…. maybe this one isn’t my fault.

2. Our kitchen layout. Cindy is constantly amazed at how many cabinets I have to open to find a plate. Apparently they are always in the same cabinet, but I almost never get it on my first guess.