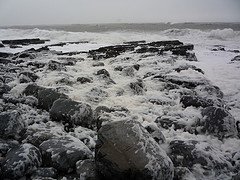 Waves are known for carrying boats to where they need to go. When I read about wild waves, I think of the waves that come from a storm, churning without direction, and threatening to send even experienced boaters to a deep, dark grave. The people that Jude is writing about were teaching a false doctrine that put their own desires over God’s desires. This kind of living is chaotic, like wild waves, and definitely not of God. They were trying to convince people that their leaders were wrong, and taught that it was alright to give into their desires. Like wild waves, these troublemakers were looking to pull anyone they could into their dangerous current.

The troublemakers should have felt shame by their actions and their teachings, but they covered up their shame by warping religious teachings for their own purposes. They were foaming at the mouth. Like wild waves, these troublemakers churned up foam that became so thick it kept innocent boaters from seeing the dangerous rocks and reefs of their shameful teachings. Watch out for wild waves, including the wild waves of our own hearts!

Prayer: Dear God, May your desires be my desires. May your ways be my ways. May your words be my words. Reduce me. Increase you in me. Help me not to churn up foam, but to shine your light.